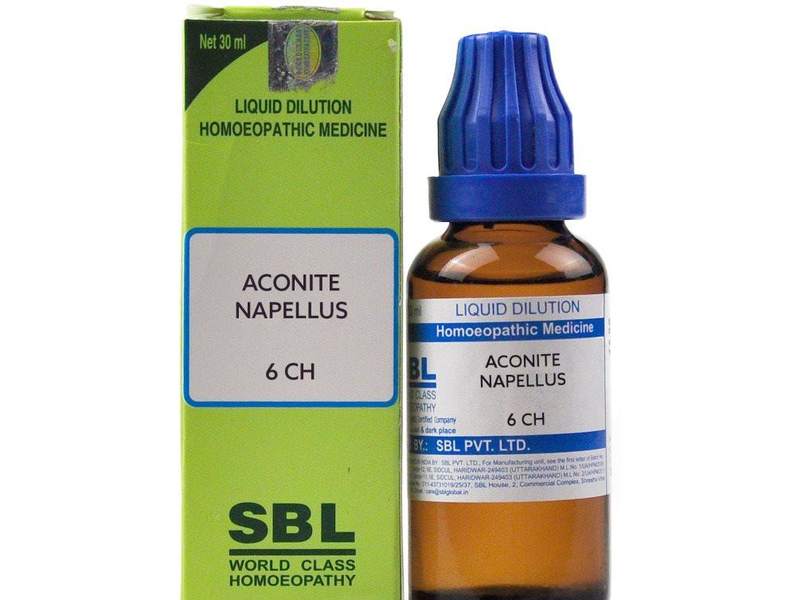 Duration of Action: 6 hours to 2 days

Thermal Relationship: Neither chilly nor hot, but seems to be hot.

It is also called Monk’s hood because of the shape of it’s flowers, which turn over and give the appearance of a hood thrown over the head. The name is also said to originate from Aconis, a city of Bithynia (in Asia Minor) and Napus means a turnip, from the shape of its roots.

In 1762, Baron Stoerck, a Viennese physician introduced Aconite to medicine. In 1805, Dr Hahnemann introduced it to homeopathy. This remedy belongs to the cardiac irritant group.

It is a very acute, short acting remedy. All complaints come suddenly and violently and go away in the same manner. It is the first remedy to be thought of in inflammation.

Dr Clarke mentioned ‘If Cinchona was the Newtons apple of homeopathic discovery, Aconite is the remedy by which Dr Hahnemann was able to meet most of the conditions which, in his days where treated by blood letting. This deadly poisonous drug affects every system as well as the organs of the body, so also the heart. This drug causes fianctional disturbance and the key word which stands to describe this drug is tension. This drug covers most of the acute as well as chronic complaints relating to the cardiovascular system.”

Habit and Habitat: It is a perennial herb, native of Asia, Siberia, Europe and America. It grows 2-6 feet in height on hard rocks in mountainous regions. Some species of Aconite are very toxic in nature.

Constitution and Physiognomy: It is a short acting remedy; suits people leading a sedentary life. Suits persons who are strong, robust, plethoric, sanguine, have dark hair and eyes and are with rigid muscular fibre.

Active Principles (Chemical Constituents): This drug contains acotinine, neopelline, aconine, ephedrine, aconitic and succinic acid. The main alkaloid is ‘aconitine’. The properties of aconite are mainly those of aconitine extremely poisonous and narcotic. It also contains calcium and plenty of starch, hypaconitine, mesaconitine and neoline.

Restlessness: This is one of the Nash’s Trios of Restlessness (other two are Rhus-t and Ars). Patient is extremely anxious; he does everything in a haste. He tosses about in agony; restless, especially at night.

Sudden and violent onset: All symptoms of the disease come violently and suddenly, and go out in the same manner.

Burning thirst: Thirst of Aconite is very peculiar and unquenchable, Patient is very thirsty and drinks large quantities of cold water at a time at long intervals.

Burning, tingling and numbness: Burning runs throughout the remedy; dry burning heat during fever accompanied by numbness and a tingling sensation.

Haemorrhage: Bleeding is bright red and copious, especially in haemoptysis, epistaxis and piles.

Great pain: It is one of Nash’s Trios of Pain remedies (others are Coff and Cham). Pain is intolerable. Patient becomes restless and crazy; pain drives patient out of bed.

Tension: It is a keynote symptom of Aconite.

Dry and hot skin: During fever, the skin of the patient is very dry and hot. Perspiration is only over the rested parts.

Red face: During fever, the face becomes red and pale alternately with fright and anxiety.

Fear of death: It is a very characteristic symptom of Aconite. Patient thinks that he will die very soon due to his disease. He also predicts the day and time of death but he thinks that he can be saved if somebody calls the doctor and gives him the medicine. A similar symptom is also found in Ars. The patient thinks that he will die because his disease is incurable and that it cannot be cured by taking medicines. In Ars, thus, for this reason the patient denies the medicine.

Sensitiveness: Patient is very sensitive to light and noise.

Paralysis: It is a characteristic of Aconite from exposure north, dry, cold winds.

Faint: Faint or giddiness on rising from bed.

Fever: It is caused due to exposure to north, dry, cold winds and by checking of perspiration. May also be due to shock, fear, fright and heat of the sun. Temperature is very high, comes suddenly and violently; severe chill, especially in the evening and at night time. Intense nervousness; skin is dry and hot.

Restlessness: Aconite is one of the Nash’s Trios of Restlessness. Aconite is mentally restless, patient becomes more restless at night time. Restlessness is more due to anxiety, worry and fear.

Restlessness with fear of death and great anxiety. The impatience and anxiety makes the patient restless. She constantly changes position. The true reason of this restlessness is to be found in a state of internal turmoil, anxiety and agony. She moans and laments, screams and shouts, not knowing what to do and how to find consolation. The other remedies Nash’s Trio of Restlessness include Rhus-t which is physically restless and Ars which is both mentally and physically restless.

Paralysis: Paralysis is due to exposure to cold air, draught of north-west wind. Onset is sudden and violent. Numbness and tingling sensation of the parts. Great thirst for cold water. Anxiety and fear of death. Mentally, the patient is very restless.

Cardiac symptoms: Stitching pain in the heart, numbness in the left arm and tingling sensation in the fingers. Pulse hard and tense. Tachycardia, dyspnoea, pain in pericardium from fright or from exposure to dry air. Great anxiety, fear of death and restlessness, along with profuse sweat and hot skin.

Fear: Great fear and anxiety of mind with great nervous excitability is characteristic of Aconite. Patient is afraid to go out, to go into a crowd where there is any kind of excitement or several people. It has fear of death in acute diseases, fear of darkness, fear of ghosts, fear to cross the street, fear to cross a bridge, fear of death in pregnancy. Fear of the fright remains. Life is rendered miserable for Aconite patients due to the fear that their disease will prove fatal; also predicts the day and moment of death.

Aggravation: Evening, night time, lying on the affected side, music, during inspiration, upon rising, in a warm room, from tobacco smoking.

Amelioration: In the open air, after perspiration.

Repetition: It must be repeated frequently in an acute condition.

Effective when the left side is chiefly involved. It’s action closely resembles that of Cactus, Naja and Spigelia – Dr Richard Huges