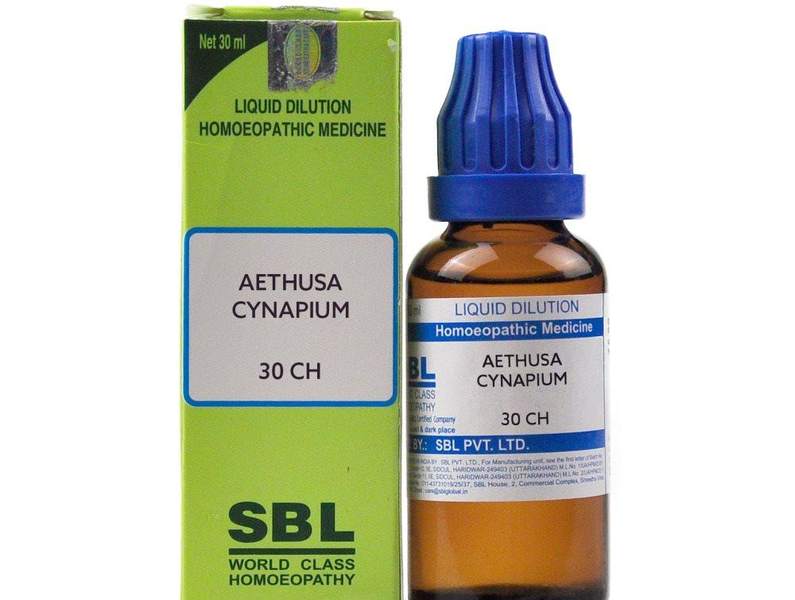 Introduction and History: It is one of the well known remedies of homeopathy. It is best for vomiting in children, during the dentitional period and during summer season. Only an intelligent person can distinguish it from real parsley; and hence the name Fool’s parsley is given.

Habit and Habitat: A common weed found abundantly throughout Europe. It is about a foot high and strongly resembles parsley in appearance, but is distinguished from it by its nauseous smell when rubbed and its loathsome odour. Flowers are white. Juice from the leaves is acrid in taste.

Preparation and Parts Used: The whole fresh plant when in flower is used for the preparation of mother tincture.

Constitution and Physiognomy: Teething children with extreme prostration, who cannot bear milk, are anxious, have a sunken face with herpetic eruptions on the nose.

Intolerance of milk: Cannot bear milk in any form; it is vomited in large curds as soon as swallowed; hungry after vomiting with great weakness and drowsiness.

Violence: Onset of symptoms is sudden and violent with great exhaustion and lack of reaction.

Indigestion: Indigestion with regurgitation of food after eating.

Glandular swellings: Swelling of mammary glands and glands around the neck.

Puffiness: Face is puffed and spotted, red and pale with marked linea nasalis.

Eruptions: Around the joints, especially knee, elbow and ankle; herpetic
eruptions at the tip of the nose.

Fever: Great fever with complete absence of thirst; cannot bear to be
uncovered during perspiration.

Want of power: Weakness of lower extremities, want of power; cannot
stand up or hold head up; back feels as if in a vise.

Back: Aching in small of back.

Nausea and vomiting: It is a wonderful remedy in vomiting of children, especially during the dentitional period and in hot summer weather. Child cannot tolerate milk in any form. Large green curds of milk are vomited. followed by great exhaustion; there is a drawn look about the mouth suggestive of nausea. The child is very hungry, and soon after eating or nursing vomiting occurs with a rush and the child falls back exhausted.

Aethusa baby: It is one of the best remedies for children in vomiting, cholera infantum and epilepsy, especially during the dentitional period, in hot summer weather. The baby cannot tolerate milk in any form due to a peculiar gastric irritation. The child is very weak and cannot stand up or hold the head up. Sleepiness is persistent. The baby is idiotic, confused and has an incapacity to think. There is great weakness and prostration with sleepiness. Sunken face with well marked linea nasalis. Pulse is small, quick and hard. Herpetic eruption at the end of the nose. Epileptiform spasms with clenched thumbs, red face, eyes turned downwards, dilated immovable pupils, foam at mouth and locked jaw.

Aggravation: From 3 to 4 am, towards evening, in the morning, shortly after the morning, in summers, after eating or drinking milk in any form, after vomiting, stool, spasm and during the dentitional period.

Amelioration: In open air, from rest, tight bandage on head, walking on the seashore.

In marasmus the head is weak, cannot hold it up: Abrot, Aeth, Calc-p.

Repetition: It should be repeated after each stool, vomiting or convulsion.

Note: It is a magic remedy for “EXAMINATION FUNK.“