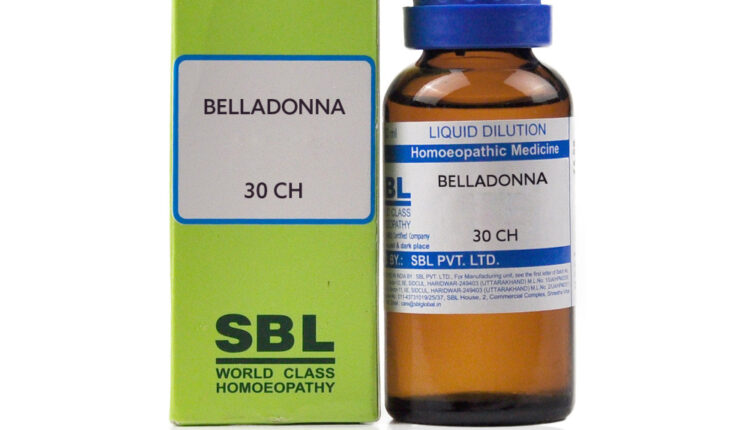 Terrible Fever – If there is inflammation in the lungs, brain, liver, intestines or any other organ, then there is a severe fever. If a hand is placed on the skin of this patient, it has to be removed immediately because there is severe heat in the skin. Even after taking away the hands of such a fierce heat, the memory of summer remains for some time. Even if there is swelling in any part of the patient, touching it gives a feeling of severe exasperation.

Do not give belladonna in typhoid fever – Even if this type of rash is present in typhoid, even then belladonna should never be given in it. The reason for this is that it is necessary to have a balance between the speed of medicine and the rate of disease. Belladonna’s complaints come suddenly, suddenly, with great speed, and they go away all at once. Typhoid does not come on suddenly, comes on slowly and goes away slowly. There is no harmony between the speed of Belladonna and the speed of typhoid, so giving Belladonna in it can increase, not decrease, the disease. It is advisable to give Belladonna in the same fever in which the fever comes suddenly, not at a slow pace. Belladonna has heat, extremely hot, fierce heat.

Hematuria – The second main symptom in Belladonna’s inflammation is hemorrhage. The area of ​​the organ where the inflammation has occurred, it appears very red. After redness, its color may become lighter, some may darken, it may also happen that it is not particularly recognized but initially it is bright red. If there is swelling in the knots of the body, then it will also be red in color, if the throat becomes red, it is like ember, then its color may fade, but in the beginning it is red color.

Inflammation, itching, and burning symptoms include swelling, eye pain, dysentery, hemorrhoids and rheumatism – it has been said that in Belladonna the three basic symptoms are itching, hemorrhage and burning. Keeping these three in mind, it is easily understood how useful it is in inflammation, eye pain, dysentery and piles. Apart from these, wherever there are these three symptoms, the same belladonna is useful.

Swelling in which there is fever, redness and burning – If any part is swollen, the site of swelling cannot be touched – Remember that intolerance to touch is characteristic of Belladonna medicine – There is pain, Feeling that swelling the area will burst, along with it there is heat, redness and burning in that place, then Belladonna is a medicine.

(2) Excess accumulation of blood and headache – We have just mentioned fever, redness and burning sensation. Why are there fever, redness and burning? The reason for this is the accumulation of blood at some place. Belladonna is thus the king of medicines when the blood accumulates in a particular organ. This accumulation of blood can occur anywhere—in the head, in the chest, in the groin, in the joints, on the skin-any part of the body. The special feature of this type of blood coagulation is that it comes with great speed and comes immediately. Belladonna’s specialty is to come with lightning speed. The child was perfectly fine when he slept, but just in the middle of the night he had a stroke, spasms in his arms and legs, pain in the abdomen – all these are sudden and rapid blood clotting symptoms due to Belladonna. Due to these symptoms, it is also an excellent medicine for high-blood pressure.

Headache due to coagulation – When the movement of blood goes towards the head, then the headache starts. Belladonna causes severe headache. Pain as if some knife were going in the head. Belladonna’s patient cannot tolerate movement, cannot tolerate touch, cannot tolerate light and wind. The child lying on the bed cries with a headache, although the movement of the head aggravates the headache. This headache is caused by the accumulation of blood in the head. When the fever is high, then such a headache occurs. The patient feels that the blood is running towards the head. In Belladonna’s headache, the head is hot and the hands and feet are cold, the eyes are red, the headache increases when lying down, the patient ties the head tightly with a turban or something, Then he feels comfortable.

Insanity – Belladonna has a state of insanity when the blood flow to the head becomes excessive. He asks for his food, but instead of eating, he bites the spoon, chews on the saucer, pokes his nose and barks like a dog. He sees such imaginary horrific scenes from which he wants to run away or hide in order to save his life. His madness takes the form of fervent frenzy in which he sabotages, beats and abuses. Dr. Nash has given special emphasis on three drugs for insanity – Belladonna, Hyoscyamus and Stramonium.

The pain comes and goes all of a sudden – the rapid onset of symptoms, and the sudden onset is a characteristic of Belladonna. The form of this symptom becomes clear when we see that any pain comes and goes suddenly, then it gets cured with belladonna. There was a cold, suddenly the pain started, the disease took as much time as it had to spend, and as soon as the pain had come, it calmed down completely. Sometimes this pain goes away after a few minutes. The pain in the stramonium starts sweetly, gradually increases, going to the high peak then gradually subsides. The headache of magnesia phos comes on suddenly, persists for a long time and goes away suddenly. Sulphuric-Acid starts slowly but goes away.

Comparison of Belladonna and Aconite – Both these medicines are useful for people with strong body. A strong, healthy child or a strong young man, understanding what the cold will do to him, goes out in the cold wearing less clothes and gets infected by some cold disease only at night or till early morning. The attack of the disease is sudden and severe. Both are similar in this respect, but in Belladonna there is a storm in the brain, fever is accompanied by unbearable headache, in Aconite there is a storm in the blood flow, pain in the chest or heart, pneumonia, cough, gets cold.

Cannot tolerate light, noise, touch, etc. – Extreme feeling arises in the five senses of this patient. The patient starts feeling light from the eyes, sound from the ears, taste from the tongue, smell from the nose, touch of the skin more than ordinary people, he cannot tolerate light, sound, smell, touch etc. His nervous system remains excited. Stimulation of the nervous system is the main symptom of Belladonna. Opium is just the opposite. There is no ‘sensitivity’ in it. In Belladonna patient, the more blood accumulates in the brain, the more intolerance will increase. Intolerance of touch is so much in him that he cannot even twirl the hair of the head, even does not allow it to touch the hair of the head. This type of intolerance is also found in other drugs. For example, a patient of hepar sulphur feels the pain so much that he becomes unconscious, a patient of nitric acid cannot tolerate the sound of vehicles moving on the road, which aggravates his discomfort, a patient with coffea cruda even in a house three floors above When one hears the sound of someone walking, one gets disturbed by it, although no one else can hear that sound, the pain in the body of a nux vomica patient is aggravated by the sound of people’s feet.

Stimulation of the bladder – Apart from Belladonna, there is no other medicine that can calm the excitability of the bladder and urinary tract. The urge to urinate is persistent. The symptom of inability to tolerate touch in this medicine is the result of that. Urine drips drop by drop and causes burning in the entire urinary tract. The entire urinary tract is found in an excited state. There is inflammation in the bladder. Due to the accumulation of blood in the bladder and its excitement, that place cannot be touched. The mental state also becomes irritable. This condition is similar to that of torsion in the bladder. There is blood in the urine, sometimes pure blood. In such a condition it is found that the bladder is full but urine is not coming out. The center of the complaint is the cervix of the gross bladder, where even a small amount of urine collects in the bladder, but it hurts to pass urine.