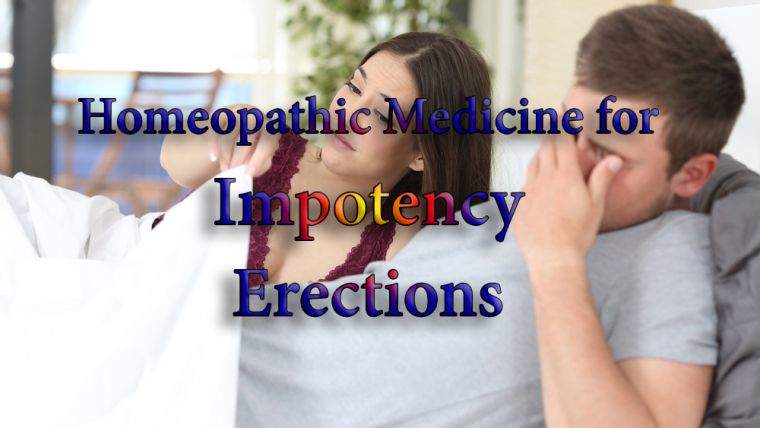 According to Dr. Alain Jardin, a French urologist, about 26 million European men have a regular problem of getting an erection. About one in ten Europeans, 26 million males over the age of 18 have difficulty achieving erection at least once out of every two times they attempted to have sex. A 1994 survey conducted in France, found that only about one in five men with erection problems ever consulted a physician about their condition even though several types of treatment are available.

Impotency is stressful for both partners. Fatigue, increased stress, job loss, illness or depression may cause rapid onset impotence. If a man is suffering from low sex drive, he may well experience difficulty attaining or maintaining an erection – firm and lasting enough for satisfactory sex. The following treatment maybe given along with some soothing advice. So far, no permanent cure is available for age induced impotency. Temporarily, medicines trigger response either through the central nervous system or enhance blood flow to the penis in old people.

Avena sat. Q (Thrice a day): Impotency due to too much indulgence. Has a favourable influence on the nervous system. Dose, 20 drops in hot water.

Damiana Q (Thrice a day) 10 drops in ½ cup of water: 10 drops, thrice daily are very good in curing impotency. Use it for a month or so.

Ginkgo biloba Q (Twice a day) 5 drops in ½ cup of water: Improves the blood flow to the brain and the penis, and produces a strong erection irrespective of the age.

Ginseng (Thrice a day): It improves blood supply to the sexual organs and improves erectile functions in impotency.

Graphites (One dose daily): Want of thrill and emission of semen in coition.

Kalium brom. (Thrice a day): Debility and impotency due to sexual excesses.

Lecithinum 3x (Thrice a day): Increases the sexual desire in both sexes. Also increases the strength of erections of penis in males by supplying more blood to it.

Lycopodium 1000 (One dose only) Repeat after 15 days: Long standing impotency. No erectile power. Premature emission. Old man cannot equal the occasion with his mate, this remedy will set things right.

Moschus (Thrice a day): Impotency due to diabetes.

Nuphar lut. Q (Twice a day) 5 drops in ½ cup of water: Absence of erection and desire. It tones up the sexual system.

Onosmodium (Thrice a day): Deficient erections due to nervousness. Too early ejaculation in coitus. Increases sex drive and desire.

Saponinum (Thrice a day): It is a steroid and is stated to cure impotency. Its long use should be avoided.

Selenium met. (Thrice a day): Impotency due to dribbling and wastage of semen during sleep. Increased desire and decreased ability. Semen thin and colourless. On attempting coition, penis relaxes.

Sulphur (One dose daily): Complete absence of erection and sexual desire. Involuntary emission during stool or while urinating.

Thuja occ. (Thrice a day): Loss of confidence. Seminal emissions without dreams. Does not want to marry because of fear of inability to perform.

Tribulus ter. Q (Thrice a day) 15 drops in ½ cup of water: Partial impotency due to over-indulgence in advancing age or when accompanied by urinary troubles or by spermatorrhea and prostate gland enlargement. It is considered one of the best remedies for spermatorrhea. Dose – 15 drops, thrice daily.

Yohimbinum Q (Four times a day) 10 drops in ½ cup of water: An excellent remedy for impotency. Excites sexual organs. 10 drops, four times daily for a month or so. During the period of treatment, restrict the sexual activities.

NOTE 1: It is important in the first place, to determine the cause of impotency. It may have been on account of injury to the penis, spermatorrhea, over-indulgence, illness, old age, etc. Treatment should be given to remove the cause. The name of the game in regard to strong erection is the blood flow to the penis. Vitamin C strengthens the penile arteries and vitamin E protects the penile arteries from free radical damage. The following mixture is very useful for impotency: Ginseng Q, Ginkgo biloba Q, Tribulus ter. Q and Damiana Q mixed in equal parts and given 30 – 40 drops a dose, three times daily.

NOTE 2: It wasn’t long ago that science and medicine paid no attention to human sexual issues. It was not a topic for serious investigation. Gradually, scientists fully understood the anatomy of the sexual system and occurrence of erections. Apomorphine which is an alkaloid obtained from the decomposition of morphine is being studied for temporary production of erections. Efforts are being made to avoid nausea, constipation and insomnia which occur by its use on using a suitable potency.