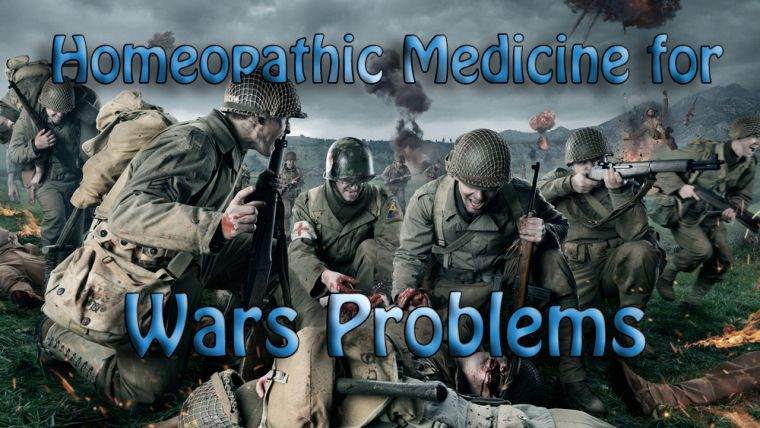 Aconitum nap. (Thrice a day): A soldier becomes nervous on taking part in a war for fear of death or other horrors of war and is reluctant to fight. A dose of this remedy will remove his fears and nervousness.

Argentum nit. (Thrice a day): By the use of this remedy, anxiety on account of air raids is diminished.

Arnica mont. (Thrice a day): Any person who has been too dost to the site

Arsenicum alb. (Thrice a day): Sleeplessness due to fear of air raids is cured by this remedy.

Borax 3x (Thrice a day): Violent fright from the sound of a firing gun, even at a distance.

Convallaria maj. Q (Twice a day): Palpitations and impending heart failure of the aged from a sudden explosion of a bomb. Extremely rapid and irregular pulse.

Hypericum Q (Twice a day): For healing the wounds produced by gun shots and after the lead has been take out surgically, apply externally and take orally for injuries of the nerves.

Ignatia amara (Thrice a day): Fear and anxiety of air raids is removed by the use of this remedy.

Iodium Q (Twice a day): It is a powerful and harmless remedy to keep gunshot wounds clean and disinfected when used locally.

Kalium iod. 1x (Thrice a day): It protects the thyroid gland in case of an accidental release of radioactivity from the nuclear stations. People living near, in about a 10 kilometre radius of nuclear generating plants, should keep such tablets handy in their houses and take them as soon as possible, after the radiation leak, in order to avoid permanent damage to their thyroid gland and they should move to a far-off place quickly.

Phosphorus (One dose daily), Strontium carb. (Thrice a day): Removes bad effects of the radiations on account of an atom bomb explosion.

Thallium (Thrice a day): Loss of hair due to an atom bomb explosion.