How to Find Constitutional Medicine In Homeopathy 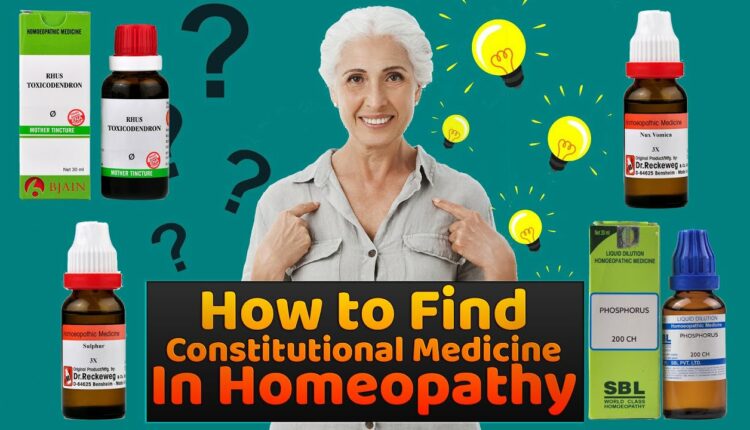 In this post, we will understand how to know the patient’s constitutional medicine, how to choose homeopathic medicine, as an example, so let’s understand :-

A woman whose age is about 52 years came to me for medical treatment. She said that she has pain in her stomach and feels great pain. Immediately after eating, the stomach gets filled with air, gradually the stomach becomes lighter. There is rumbling in the stomach, little appetite, but the stomach becomes clear. Been drinking a lot of tea for the last 20 years. She wanted some treatment for her colic.

How could the choice of medicine have been done by just saying so much or taking life? All these were symptoms of one organ, only the stomach. In such a situation, every homeopath has to get information about the mental-symptom, broad-symptom, specific-symptom of the patient by cross-examination, asking questions.

I also cross-examined her, answered questions to find out what were her psychotic symptoms, what were the general symptoms and whether there were any specific symptoms of her disease or not.

On asking Desires and Aversion, she said that she likes salt and sweet, fatty food like butter, cream etc. – She dislikes, acidic things – sour, lemon, pickle etc. Acidity is caused by sour things.

She gets flushes of heat and feels good when she sweats. She was very thin, the slightest thing used to get her excited.

On inquiring more deeply, it was found that she felt extremely cold. In the spring, her disease worsened greatly. Even if there was a storm or thunder, her health would fall.

When she woke up in the morning, her mood was irritable and worried about others. She was tormented by the fear of thieves or bandits entering the house. If nothing happens somewhere – this was also a fear; The fear of the crowd, if she passed through the tunnel, there was a fear that the breath might suffocate. Desperation, doubt was in her health. Her nature to get angry at the slightest thing, to be shocked if there is a slight knock.

Let us now consider the symptoms of this woman from a homeopathic point of view:-

The very first thing that comes to our attention is that her symptoms aggravated by ‘Cold’. Therefore, all the heat-oriented medicines, they get canceled in this choice of medicines, they get eliminated. According to the homeopathic principle, we can only consider cold-based medicines for the cold patient, so in the symptoms we will give place to those medicines which are cold-predominant.

These were all mental symptoms. Now let’s see some practical examples of therapy:-

In addition to the mental symptoms, there are some widespread symptoms, whose medicines we are also describing along with their evaluation:

Keep in mind that due to the cold nature of the patient, first we canceled the hot medicines like Natrum Mur, Pulsatilla etc. and took only those medicines which are cold-oriented. Thus our field of choice was limited. ‘Fear’, ‘anxiety’, ‘anger’, ‘season’, ‘desire’ etc. But we took only those medicines which are cold-predominant. Thus Arsenic, Calcarea Carb, Causticum, Natrum Carb, Nux Vomica, Phosphorus, Rhus tox, Sepia – these medicines remain for our field of thought.

The number of symptoms we have considered is 14. Now it has to be seen that in which medicine most of the above symptoms are found.

Out of the above 14 symptoms in Arsenic, 8 symptoms were found in it.

Thus we have seen that Arsenic and Phosphorus are the two medicine that come out from repertorization of this patient. This conclusion has been drawn only on the basis of mental and general symptoms. Although there is a value in the symptoms of phosphorus, yet keeping in mind that the patient of phosphorus, despite being cold-headed, wants to drink cold water like ice in stomach problems, which is not a symptom in this patient, in such a situation It was decided that three doses of Arsenic 30 should be given to her every six hours, the result was that the patient’s colic continued to go away and within a few weeks she recovered and went home.

This example throws light on the fact that if the medicine is given keeping in mind the general symptoms – i.e. mental, heat, cold etc., season related, desire and reluctance towards food – then it is beneficial.