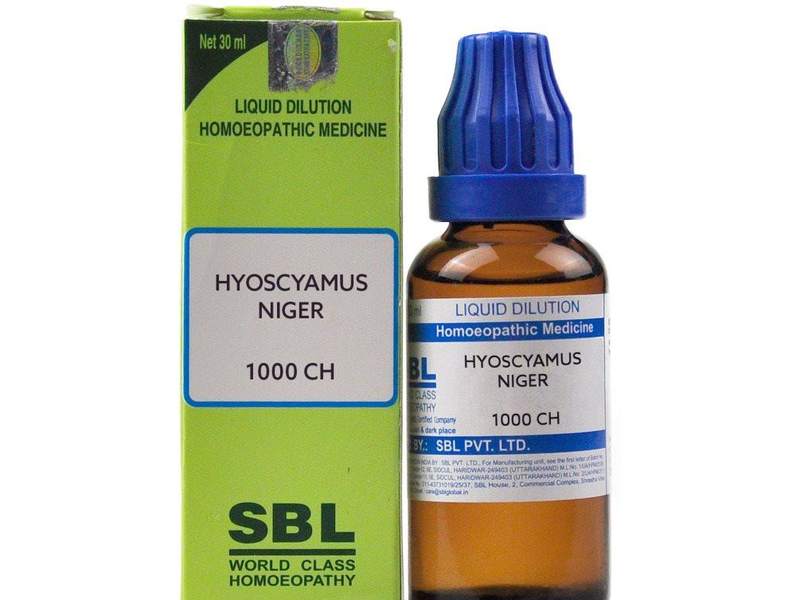 Introduction and History: Hyoscyamus is known since ancient times and was used as a house hold drug. The references about this drug are found in ‘Arabian Nights’ and also in Anglo-Saxon works on medicine. It is one of the most important remedies of the materia medica. It is a gift of the vegetable kingdom given to homeopathy.

It acts like a purgative, but in allopathy it is used as a ‘cerebral depressant’ in acute mania. The name Hyoscyamus is derived from the word ‘hyos’ meaning a hog and ‘cyamos’ meaning a bean, because the bean acts as an intoxicant upon Swines, but not on other animals. ‘Niger’ means black; the inner side of the flowers is purplish-black in colour. This drug is poisonous to fowls, hence its name – Henbane is very appropriate and correct. It is one of the Nash’s Trio of Delirium. The others are Belladonna and Stramonium. Hyoscyamus is very poisonous in its crude form.

Habit and Habitat: It is originally from Europe and Asia but is largely cultivated in North America. Also found in India from Kashmir to Garhwal in the Himalayas. It is a biennial deciduous plant growing to the height of 15 of 60 cms. It is covered with long, soft, pointed, white hair, with fusiform roots. It grows on waste ground, such as hedge banks and road sides.

Constitution and Physiognomy: It is adapted to light haired, sanguine people with a pale or bluish face; who are nervous, irritable and hysterical.

Active Principles (Chemical Constituents): The principal alkaloid of this drug is hyoscyamine while traces of scopolamine, atropine and hyoscine are present in lesser amounts. It also contains an acid oil of hyoscyamus and potassium nitrate.

Convulsions: Convulsions of children from fright or from irritation of intestinal worms. Suddenly becomes unconscious. Spasmodic affections of pregnant women.

Pain: Every muscle of the body twitches, from head to foot, constant state of erythism; tonic and clonic spasms.

Fear: Fear of being poisoned, fear of being alone, of being bitten, being sold. Suspects before eating or drinking.

Cough: Dry cough; spasmodic, when lying down, worse at night, after eating, drinking, talking and completely relieved by sitting up.

Sleeplessness: Patient is very irritable and excitable. There is intense sleeplessness due to embarrassment or imaginary things.

Face: Flushed and dark red, bloated and excited face, dryness of the mouth. Dry tongue loaded with a brownish coating.

Throat: Constriction of throat with inability to swallow, especially fluids and liquids.

Fever (typhoid): Hyoscyamus is very useful in typhoid fever. In the early stage of the disease, the delirium and later, symptoms of cerebral paralysis may call for Hyoscyamus. The delirium is furious or of low muttering type, with picking at the bed clothes. Later on there may be dropping of the lower jaw. The patient is very weak and debilitated with muscular twitchings as a prominent symptom. Involuntary stools and urine.

During fever, sensorium is clouded with staring eyes and grasping at flocks. Tongue is dry with a brown coating, cracked, paralysed; difficulty in speech. Breath is offensive and putrid; bad taste in the mouth.

Paralysis of bladder: Paralysis of urinary bladder after labour. Micturition frequent, scanty, difficult, involuntary; has no will to urinate, retention of urine.

Aggravation: During menses, at night, from jealousy, unhappy love, mental affections, by lying down, from touch, cold air, etc.

Amelioration: By walking, stooping, from warmth, sitting and motion.

Repetition: Single dose is enough. No need of repetition unless required.