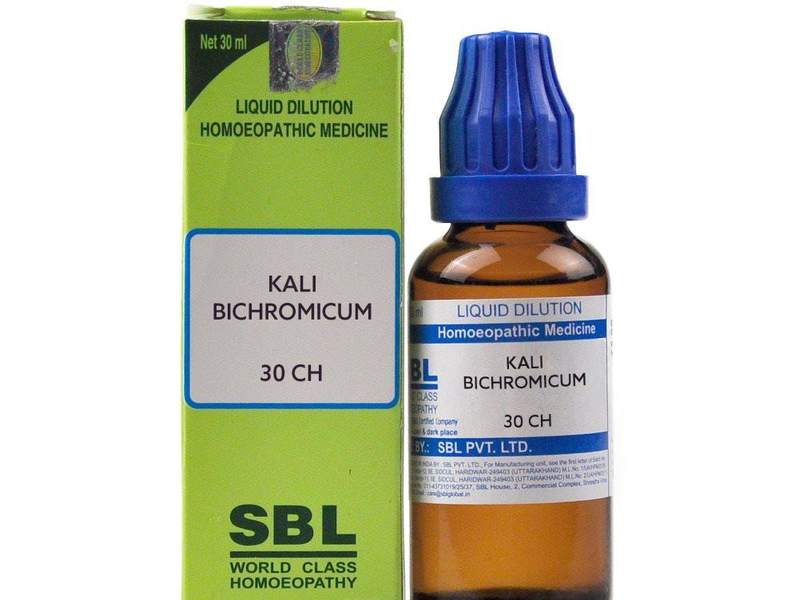 Introduction and History: Kalium bichromicum is a very important medicine in homeopathic materia medica. This is an antisyphilitic remedy of great repute and wide application. The effect of the drug on the entire human economy includes characteristics which are of utmost value to the prescriber, rendering the drug one of the most important members of the homeopathic materia medica. It is also a remedy with some very marked and characteristic features of its own.

Description: These are large, orange-red, transparent crystals or a crystalline powder. It is odourless while the taste is metallic. It is stable in air, soluble in water, insoluble in alcohol and commonly prepared from chrome iron ore.

Pain: Pains are shifting in type. This is the keynote symptom of Kalium bichromicum. Flying type of pain, goes from side to side, pain comes suddenly and disappears suddenly. Pains in small spots, can be covered with the point of a finger.

Indolence: Indolent inflammations, indolent ulcers. Ulcers of cornea with no photophobia and no redness. Slow, scrofulous and sycotic ophthalmia.

Discharges: Discharges from mucous membranes of tenacious, stringy mucous which adhere to the parts and can be drawn out into long strings.

Ulceration: Tendency to ulcerate is a marked keynote of the remedy. Chronic intestinal ulceration. Ulceration of septum, with bloody discharge or large flakes of hard mucous.

Cough: Violent rattling, with gagging from viscid mucous in the throat.

Headache: Unbearable headache, blurred vision, must lie down; aversion to light and noise.

Gastric complaints: Loss of appetite; complaints from bad effects of beer, weight in pit of stomach; flatulence; vomiting of ropy mucous and blood.

Nose: Discharge of plugs, ‘clinkers’; tough, ropy, green, fluid mucous; in clear masses. Pressing pain at the root of nose and in the forehead.

Desires and aversions: Great desire for acids and beer, but aversion to meat, water, to move about, to rise from bed.

Asthma and cough: Potash produces asthmatic conditions, and under Kalium bichromicum we find the attacks coming on at about three or four o’clock in the morning, compelling the patient to sit up to breathe; he sits up and bends forward which relieves somewhat, this is characteristic of the remedy.

It is similar to Arsenicum except for the feature of tenacious mucous. Kalium carbonicum has asthma worse towards morning, with a feeling as if there were no air in the chest. Kalium phosphoricum has been successfully used in asthma, especially in the nervous variety.

Gastrointestinal derangements: It is generally indicated in peptic ulcers and duodenal ulcers which are due to the bad effects of alcohol and beer. There is loss of appetite and stomach is full of gas. Patient feels weight in the pit of the stomach. Ulcers with pain in small spots which can be covered with the tip of the finger. Pains are shifting in type; come suddenly and disappear Suddenly. There is vomiting of ropy, stringy mucous and blood. Also a great desire for beer and acids but aversion to meat and water.

Rheumatism: Useful in syphilitic rheumatism. Rheumatism, especially that which occurs in spring or in summer weather, when there are cool days or nights. The joints are affected considerably and there are more pains about the fingers and wrists, than in any other part of the body. Pains wander about, suddenly jumping from one part of the body to another and are better by moving the affected part.

Gastric and rheumatic symptoms often alternate. Tearing sensation in the tibia, with swelling and stiffness of joints. Pain in small spots which can be covered with the tip of a finger. Pain comes suddenly and goes suddenly. It is also called for in gonorrhoeal rheumatism; the pains are better in a warm room.

Aggravation: In winters, from cold damp weather, periodically, in summers, in hot weather, from 2 to 3 am, during morning and night, undressing, from beer.

Amelioration: Eating, vomiting, from a short sleep, skin symptoms in cold weather, by lying down, in open air.

Crusts and elastic plug in the nose: Kali-bi, Lyc, Teucr.

Distress in stomach while eating or just after eating: Kali-bi, Nux-m.

Note: Calcarea carbonica is to be thought of in acute or chronic nasal catarrh after Kalium bichromicum.