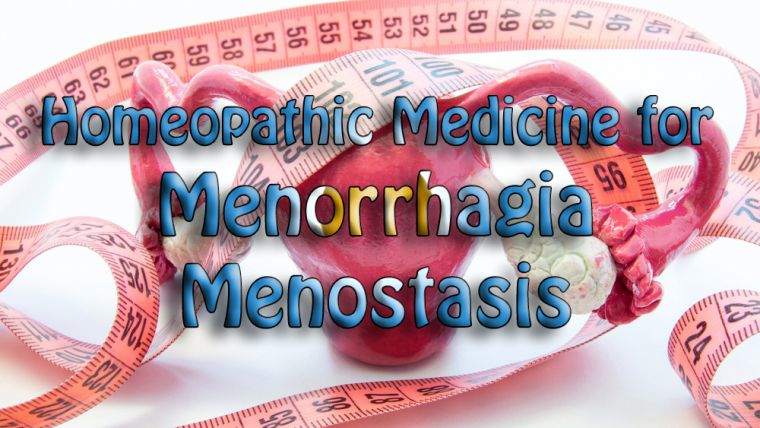 Aloe soc. (Thrice a day): Too early, too profuse, too long-lasting periods.

Calcarea carb. (Thrice a day): Too early, too profuse especially in pale subjects with cold and damp feet, with marked tendency to gain weight.

Caulophyllum (Thrice a day): Heavy and frequent menstruation with pains.

China off. 1x (Thrice a day): Black lumps in blood.

Cyclamen (Thrice a day): Profuse, black, membranous, clotted blood, too early, with labour-like pains from back to pubes.

Ficus rel. Q (Twice a day) 10 drops in ½ cup of water: Bleeding from uterus specially at any time other than during menstrual periods. Excessive bleeding at the time of a menstrual period, either in number of days or amount of blood or both.

Hamamelis Q (Thrice a day) 10 drops in ½ cup of water: Dark blood accompanied with ovarian irritation caused by a fall.

Helonias (Thrice a day): Too early, too profuse, too long-lasting periods with bearing down, prolapsed and rectal urging. Menses protracted, exhausting and obstinate during menopause.

Ipecacuanha (Thrice a day): In severest form of prolonged menses which otherwise is simple. Bright red discharge with or without nausea.

Kreosotum (Thrice a day): Menses too early, prolonged. Menstrual flow intermits, ceases on sitting or walking; reappears on lying down.

Platinum met. (Twice a day): It suits proud and arrogant ladies. Menses are too early, too profuse and with dark clots. There is tingling in private parts and excessive sexual desire. Bearing down sensation. Heavy menses with early clotted flow.

Sabina (Thrice a day): Bright red flow with bearing down in abdomen.

Secale cor. (Thrice a day): There is continuous oozing of pale blood with colic between the periods. Burning pains in the uterus which is relieved by washing with cold water and in cold weather.

Sepia (Thrice a day): Heavy menstruation with faintness and tear fulness. Pain in the uterus is severe enough to cause fainting.

Thlaspi bursa Q (Twice a day) 10 drops in ½ cup of water: Increased and copious flow with clots and debility which remains even between periods.