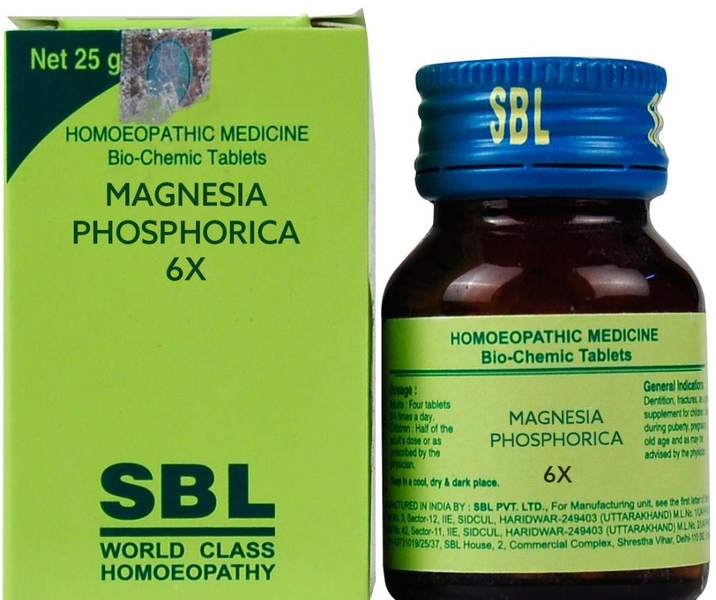 Introduction and History: It is a great antineuralgic and antispasmodic remedy. It is a very precious and important tissue remedy. It occupies an important place amongst some of the best neuralgic remedies.

Magnesia phosphorica is found in blood corpuscles, muscles, brain, spinal marrow and in various other tissues of the human body. It is a very good remedy for pain especially for crampy, spasmodic, griping, digging, boring, cutting, stitching, gnawing pains, which are mostly neuralgic in type. It is a right sided, polychrest remedy of the highest order.

Description: It is made by mixing phosphate of soda with sulphate of magnesia. The crystals resulting are six sided and needle-like. They have a cooling, sweetish taste. They are sparingly soluble in water; 2 parts of magnesium sulphate are dissolved in 32 parts of water and mixed with a solution prepared by mixing 3 parts of sodium phosphate in 32 parts of water. This solution is set aside to crystallize, which takes about 24 hours. Boiling decomposes it. It exists in grains of cereals, and can be detected in a considerable quantity in beer.

Preparation: This salt is triturated with sugar of milk to prepare decimal triturations, according to the rules of homeopathic pharmacy.

Flatulence: Flatulent distension of abdomen with constrictive pain that is, flatulent colic, forcing the patient to bend double, relieved from heat and rubbing.

Shifting: Every night neuralgia shifts from place to place.

Cramps and convulsions: Spasmodic convulsions, with stiffness of the limbs, clenched fingers and thumbs drawn in. Spasmodic retention of urine. Cramps of the extremities, violent cramps in dysentery.

Time aggravation: All symptoms are aggravated from 4 to 9 pm.

Right-sidedness: It is a right sided remedy having special affinity for the right side.

Headache: Headache begins in occiput and extends over the head; face red, flushed, worse 10 to 11 am or 4 to 5 pm.

Dysmenorrhoea: Spasmodic pains in dysmenorrhoea, better by bending double and after flow begins.

Chilliness: Chill runs up and down the back with shivering. Dread of uncovering.

Abdominal colic: It is a very good remedy for abdominal colic. Pain anywhere in the abdomen. Pains are spasmodic, cramping, sharp, stabbing, cutting, stitching, shooting in type. Pain comes in paroxysms. Pains change their place rapidly; intolerable pains; great distension of abdomen; patient gets relief by rubbing, warmth and pressure, by bending double. Patient wants to loosen clothes. Symptoms worse by touch. Colocynthis is also a remedy for abdominal colic. Both have similar colic. Patient has to bend double, both are ameliorated by hard pressure and warmth, but in Magnesia phosphorica pains are relieved more by pressure than by heat. On the contrary, in Colocynthis, pains are relieved by heat more than pressure. Colocynthis, has left sided colic while Magnesia phosphorica has right sided colic. In Colocynthis, colic is due to anger with indignation, which is not found in Magnesia phosphorica.

Neuralgia: It is an excellent remedy for neuralgia. Right sided neuralgia, especially of face, teeth, Supra or infra orbital region; pains dart along the course of the nerve. Pains are unbearable like lightening, rapidly changing place and worse by a draught of cold air, motion and better by bending double, heat and pressure.

Dysmenorrhoea: It is a very good remedy for membranous dysmenorrhoea. The pains are neuralgic and crampy preceding the flow and the great indication for the use of this remedy is the relief from warmth and the aggravation from motion. Menses are too early, stringy and dark; pains are sharp, stabbing, stitching, cutting, shooting, especially on the right side, coming and going like lightening. Pain worse before the flow begins; better by heat, bending double, lying on the right side.

Repetition: It should be repeated frequently from half to one hour according to the acuteness of the disease.

Note: It acts better when given with hot water. That is why they say, Magnesia phosphorica in trituration may be so administered. In potentized forms, it is to be given without hot water.