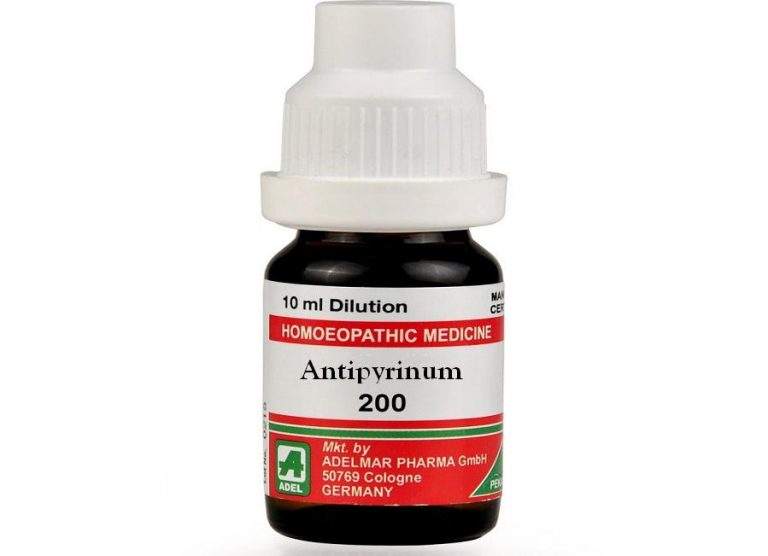 Antipyrinum is derived from coal tar. It is usually combined with some other medicine for better effects.

It was synthesized in 1884 for the first time and has been in use since then. Due to its antipyretic effect, it has been named Antipyrinum. It has been used extensively to cure influenza.

Benzocaine is combined with Antipyrinum to be used as ear drops to relieve pain and swelling caused by ear infections.

Benzocaine and Antipyrinum is a combination that is used as antibiotics, and their class is known as analgesics.

Antidote: Antipyrinum works as an antidote to the ill effects of aspirin.

Head: Antipyrinum is useful to treat some of the symptoms of the head. If the head is warm, or there is a headache due to ears, this medicine is beneficial.

Eyes: Patients suffering from diseases of the eyes, like blepharitis, watering eyes or redness of the eyes, should use Antipyrinum.

Ears: Antipyrinum is very useful in the treatment of the ears. It is combined with Benzocaine and used as ear drops. It also helps in removing the ear wax which can cause infection.

This combination reduces the pain and discomfort in the ears.

Face: If there is recurring angioneurotic edema of the face, the patient should be treated with Antipyrinum.

Throat: Antipyrinum is useful in treating patients who suffer from throat related issues.

Stomach: Antipyrinum can also cure illnesses related to the stomach.

Urine: Antipyrinum can be used for illnesses related to the urinary tract in these cases

Female: Women suffering from some of the diseases of the female organs can also be treated with Antipyrinum. It helps in the following symptoms:

Respiratory: In symptoms of the respiratory system, Antipyrinum is helpful in some of the cases.

Heart: In case of the heartbeat stops suddenly, Antipyrinum can be used as a treatment. It should also be used if the irregularity of heartbeats is causing a burning sensation in the body.

Precautions and Side Effects

It is important to be sure that you are not allergic to this medicine.

Make sure that you consult your doctor before you start taking this medicine.