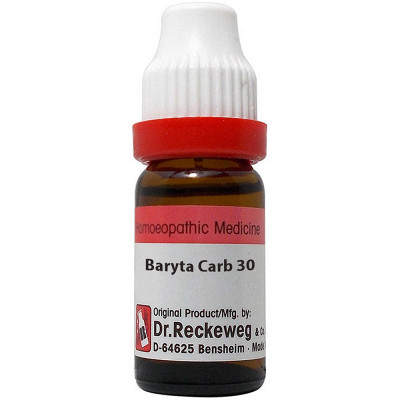 (2) Comparison of Baryta, Calcarea Carb and Silicea in physical and mental weakness – The physical and mental development of Calcarea carb child is also stunted. Both the medicines are used in the disease of drought. Calcarea baby looks plump, chubby, grows very quickly, head and abdomen are large, neck and legs are thin; The child of Baryta becomes dry from all parts instead of being chubby. Hunger screams but refuses to eat. Even in Silicea the child dries up. Both Baryta and Silicea produce foul-smelling feet, the head is bigger than the body, both are cold-headed, but in Calcarea and Silicea there is excessive sweating on the head, not in Baryta. In addition, Silicea does not have mental dwarfism like Baryta.

(3) Enlargement of the tonsils – The ‘glands’ of this patient enlarge, become hard, there are lumps in the throat, thighs and abdomen. The glands become enlarged and the muscles dry up – the body is dwarf and the mind weak – to such a patient who is cured by Baryta Carb. This medicine has a special effect on the tonsils. Tonsil enlarges due to a slight cold, sometimes it gets ripe.

Comparison of Baryta, Belladonna, Hepar and Chamomilla in tonsils – Belladonna and Hepar have a sudden attack of the tonsils, happens quickly, tonsil swells on the same night as it is cold and the puck also goes away soon, but in Baryta, the tonsils do not swell on the same day, it takes a few days . In inflammation of the tonsils of Chamomilla, there is pain in the ear, it is relieved by applying heat, the patient becomes very irritable. The pain comes at such a speed that the doctor can interpret it as Belladonna’s pain.

(4) Childlike behavior of old men – Old men and women behave like children, memory power is lost, they stagger while walking, they become like children. The characteristic feature of Baryta carb is that the overall development of the patient stops. When it is seen that a person of seventy years is behaving like a child, then it should be understood that his development has stopped, Baryta will benefit him.

(5) Cough of old-men – In old age, such a cough surrounds many people which does not leave them behind. There is a rumbling in the chest. There are few medicines for this type of cough, of which Baryta is one. Apart from this, senega, ammonium mur and baryta mur are also useful for this type of cough.

Ammonium carb is a very good medicine when a 70-year-old man has a wheezing cough in his chest all the time, which is fine during summers, and is troubled by this type of cough during winters and has no other symptoms.